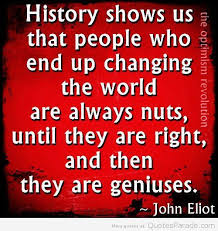 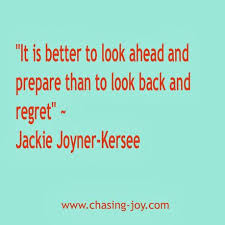 1- We are not makers of history. We are made by history. (Martin Luther King, Jr.)

2- I like the dreams of the future better than the history of the past. (Thomas Jefferson)

3- Those who don't know history are destined to repeat it. (Edmund Burke)

4- History is the version of past events that people have decided to agree upon. (Napoleon Bonaparte)

5- History never looks like history when you are living through it. (John W. Gardner)

6- People have an annoying habit of remembering things they shouldn't. (Christopher Paolini)

People are trapped in history, and history is trapped in them. (James Baldwin)

8- We are the prisoners of history. Or are we?  (Robert Penn Warren)

9- The very ink with which all history is written is merely fluid prejudice. (Mark Twain)

11- Man is a history-making creature who can neither repeat his past nor leave it behind. (W.H. Auden)

12- Each time history repeats itself, the price goes up. (Unknown)

13- People think too historically. They are always living half in a cemetery. (Aristide Briand)

14- The past is really almost as much a work of the imagination as the future. (Jessamyn West)

T15- ake advantage of your potential present and carefully create a GLORIOUS PAST that will embrace you in the future. (Phillipos)

I have no idea how many of you will read this Editorial- however I fear that its effect will be the decrease of of the number of my friends, painful for me. However I have not much time left and in the very spirit of EGO OUT- it is my duty to share with you my experience and opinions- at any risk. The rest does not more depend on me, but I cannot allow that some taboos with relatively short roots anchored in reality should stop me.

From time to time, I remember books that have formed my mode of thinking and action; today it was: A CULTURAL HISTORY OF PHYSICS by Karoly Simonyi I hve read it both in Hungarian and in English- see a short presentation by Freeman Dyson
here:

https://www.edge.org/conversation/karoly_simonyi-a-cultural-history-of-physics
I think it would very welcome a book in this style about the history of cold fusion,
LENR, LENR+ and this means a book based on a deep understanding of the facts and going to a layer deeper than the scientific-technological-management-business
aspects of this new source of energy.Digging for truths with broader ranges of  validity.
As a citizen of a smaller country and a witness of very interesting, in the sense of the Chinese proverb, I am not fond of history- it is a bad thing one another and and a source of hatred and lies. But I was taught that it is a patriotic duty and and a must to idealize history and to claim the perfection of its heroes- the necessarily glorious past is the place where our strings are, the sacred history is many times a huge obstacle to change. The mottoes say a lot...this is the reason I have decided to use so many. Living history is also scary I see in deep desperation how our Continent commits suicide  in the name of some democratic principles applied to people who are not made for democracy. OK, but I want to tell you about LENR

Cold Fusion - a major discovery of two geniuses able to see what nobody has remarked but a discovery made in very unfavorable circumstances- but I have told this hundreds of times. Cool, wet, dirty- no chances of development
Around 1991-2-3 the limits of the system were already know, heroic history was over
with the D+D=He fundamental experiment of Melvin Miles and al.

I know that this a taboo subject but it is very relevant, I think: what has happened to Founding Father Stanley Pons. I have met him only once at ICCF-2 Como and  I had
the impression that he is very, very sad. So when he has left the battlefield after the
unhappy IMRA-France episode I told myself that symbolically he is exiled now in Honore de Balzac's book: " Le Cousin Pons" And he appeased only once from them
to write a foreword to Jean Paul Biberian's splendid book about his history of cold fusion. Stanley will be 73 years old this summer- who knows why he has abandoned Cold Fusion? What are the chances he returns?
It is a disturbing possibility he has concluded that PdD does not work, in the sense, probable that it will never converted in a reproducible process used as a real source of energy.

Admirable examples of experimental inventiveness, skill and creativity- and, independently- fine theories...but till 2011- can you specify a real breakthrough, viable improvements, a solution for the fatal problems of the system? Yes, it is wonderful that the very existence of the phenomenon was demonstrated so many times, in so many labs- but can we  speak about breakthroughs , can we claim more than incremental , somewhat cyclic progress. Aren't there symptoms of a system that has exhausted its creative possibilities.

PLEASE contradict me, please destroy my arguments but do it with facts and sine ira et studio!

Till then I will focus on the new hot dry incandescent new- and different stage of LENR+ history. It is also infinitely interesting, and also not in the good sense, mainly.

Dewey Weaver just admitted on Lenr-Forum that IH’s strategy was to hedge their investment from the start. In other words: buy up your competitors and file patents. That shows bad faith. Why would Dewey admit to this?

“Woodford was aware of all possibilities with Rossi early on. The failure by Rossi to keep his side of the agreement was hedged by IH from the onset. Full speed ahead.”

Dewey needs to get out of that fictional world and get back to reality, where people can see that there is a problem here. A very large, blockish, base-minded problem. To end on a more positive note: The confluence of nativism and tribalism in Mr. Dewey Weaver’s snow jobs ensures a swirling river of discontent upon which he so peremptorily rides.


Understanding the discrete nature of angular momentum of electron in hydrogen atom with (3G,2e) model of final unification