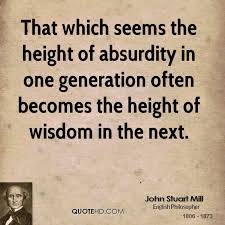 The appreciation of my readers is chicken soup for my old heart/soul, it is wonderful to be taken seriously. However, there exist more forms of seriousness and in my small essay of yesterday I have used a special one. It is not the first time that I am complaining about the presence of Absurd in LENR, paraphrasing Hannah Arendt I would say - the banality of Absurd in our oppressed and not very happy field.
The recent war between Rossi and IH has added a lot of absurd. Let's cite Rossi:
'the fact that they are trying to make the process in the blogs, gives evidence of the fact that they fear the Court.' And they have strong reason of this.
Trying hard to demonstrate that Rossi is the personified evil, evil is contagious and everybody associated with Rossi becomes bad- this after being associated with him for three long year is absurd again, perhaps even more. Watching day by day an one year long Test about which IH now says it gave no excess heat was a complete failure and not asking Rossi to stop the waste of time, after the first week or say month if you are very patient, is also absurd.
So I decided to try to expose the absurd by hyperbolizing it - I came to the idiotic and hyper-absurd idea of the 10 years test a non-sense, an impossibility...
To make it more plausible, I have used the name of an unforgettable TV series character Alf Stokes. Alf is the immoral, unscrupulous but always unsuccessful butler from our family's favorite British humor masterpiece "Do you rang My Lord?" (1990-1993) (it was synchronized in Hungarian with the voices of the best actors- the translation - the British say is better than the original. You can find everything on the Web.

To be sincere I was convinced that the idea of the 10 years Test and Alf saying :
"IH has tried very hard to help Rossi with wise advises how to make a non-existing and non-functional technology  good, has made a lot of positive propaganda for the work" will show everybody that Alf's message is just a parody, and not of high quality or plausibility. It didn't. Even the presence of a psychologist didn't helped. It is too much absurd around and it has become too familiar.

So all I can say is to renew an old old appeal:
LET'S CREATE ISLANDS OF RATIONALITY IN LENR! Even in the War Zone, please!

3) Patrick Ellul's second E-Cat belief survey
https://docs.google.com/spreadsheets/d/1G1qVrpDJkHz9zD03dJZ1xxiDDjDeUT-62l0ly4cWIfU/edit#gid=1003540169
Confidence/hopes invested in the E-Cat diminished somewhat due to the Trial, however still much more pro- than contra opinions

4) Presentation and principles of the seminar of the theory department of the Institute of Genral Physics of the Russian Academy of Sciences
by A.I, Laptukhov
About the existence in the plasma of the solar wind of a new type of nuclei- electron-ionic nuclei predicted by the theory of non-punctual electron.
http://lenr.seplm.ru/seminary/nazvanie-i-tezisy-doklada-na-seminare-teoreticheskogo-otdela-iof-ran-27042016

Why Science Still Matters In A Data-Driven Age
https://www.insidescience.org/content/why-science-still-matters-data-driven-age/3921