APR 23, 2016 THE R-PROBLEM AS LENR DRAGON A STORY AND ANDREA ROSSI"S OPINION 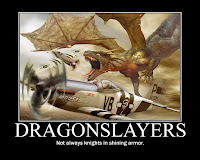 A. A metaphor of in-house dragonslaying in LENR -land

Irreproducibility is the in-house dragon of the non-technologized LENR systems.

I am writing about dragons because it happens to be Saint George's Day- that I remember well because I have a cousin Gheorghe (Gyuri) whom I want to congratulate today. You surely know about the dragon slayer activity of Saint George
however this- dragon slayer- was obviously a very popular imaginary profession, especially in the Middle Ages.

Just a few years before the start of the Renaissance, the inhabitants of a newly built castle have observed in terror that a very carnivorous Dragon is hiding somewhere in the labyrinthine underground spaces of the castle and, usually in the most dark nighttime comes and eats a human, usually children. The dragon has also robbed some innocent but beautiful maids. Nobody dared to confront the beast and the leading noblemen have decided: we will hire a professional DS- highly qualified
Dragon Slayer. You know then it was much bureaucratic thinking and a cult of titles and qualifications. Statistically speaking it was twelve times more important WHO says or does something than what he/she says and/or does. (The world has progressed and changed and evolved from then- now it is 20 times more important!)
OK, the expert they found  A. BS in Dragon Hunting from the University of Sorbonne,
PhD in Dragon Slaying from the Siegfried Univ of Reykjavik, specializations in Africa
China and the Komodo Island etc. a real authority in the matter.  Indeed it was a case of veni-vidi-vici - he came, have killed the dragon, at his request was very generously paid and went away.

But surprise! (you know surprises are statistically 80% bad)- a week later an other
Dragon has appeared at least 1.5 times more ferocious than the first! Tragedy. horror, desperation!
But then it came an offer from an dragon slaying amateur with no high qualifications at all: This, B. said: " I have killed many dragons, not bid deal. With a sword like mine and a good asbestos shield to protect you against the flames they emit, anybody can kill a dragon. WHAT I WANT IS TO SOLVE YOUR DRAGON PROBLEM!

OK, B. has killed the new dragon than has spent a week with mysterious investigations. Then he told the followings to the gathering of the leading noblemen:
"Dear gentlemen I know you will not pay me at all and I will become very unpopular here. Because I have very, very bad news for you. It happens you were so unlucky to build this fine castle exactly on a Dragon's Nest full with dragon's eggs in different stages. The dragons eggs as you know are invisible and intangible and cannot be destroyed even by explosives- anyway these are not invented yet. My advice is - let this castle to the dragons and build an other castle in a safe place- I will help you to find it."
Nobody knows how this story has ended- it is a legend about a deserted castle-
all its inhabitants- it is said-were all eaten by voracious dragons.

If somebody wants explanation regarding this confusing story- please write me.


B. What says Andrea Rossi about the LENR-Dragon- irreproducibility

The case A is irresolvable.
The cases B and C are automatically resolved when a product enters the market: in a nutshell the problem is not the reproducibility, the real problem is the realization of a product.
A product is the sole sword Saint George can kill the dragon with.

About the theoretical issue: it is important under a cultural point of view, but not essential- Mankind has made use of photons for thousands of years without any theory about them. Think to Archimedes' mirrors and ask the ghosts of the burnt ships if they worked properly.
About my theory: I am convinced my effect is due to the reverse Mossbauer effect and I made mathematical models for this but I am still not 100% sure I am right.

1) Reporting a Lawsuit in LENR

Disturbing news from Sifferkoll-  my blog is in the same boat

5) Somebody is Watching and Acting – Serious Hacking attempts on @sifferkoll Triggered by #LENR ERV Analysis!

6) From Gregory Goble
NO LENR at Clean Tech Forum 2016 WHY?
https://www.linkedin.com/pulse/lenr-clean-tech-forum-2016-why-gregory-goble


7) Rossi's missing secret or E-CatX Description or both?


Andrea Rossi- about his theory- see his answer above in the DAILY NOTES too, please:

Jona:
I have written a paper with the mathematical models to explain this, and the essence is in the Reverse Mossbauer Effect.
I am still afraid to publish it, more study has to be done and I want not to burn it prematurely in the battlefield, but the more I study, the more I am convinced of it.
I gave the draft of my paper to several scientists to explain me where am I wrong. Should it be possible to publish it just as a draft, not as a publication, I would do it, to collect critics and understand better, but I am afraid to do this move, for obvious reasons.
Warm Regards,
A.R.