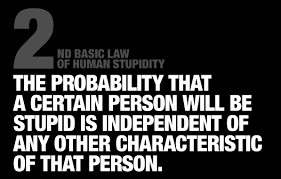 At the LENR Forum- a most must "must read" (in Latin languages you can cope easier with the superlatives) in LENR it just is discussed about how to define trolls and troublemakers. They belong to Cipolla's first law- with its dark shades of a sado-masochistic personality.
Some trolls also belong to the second law- they can be highly intelligent despite their bad deeds. I have opted quite early for a three-dimensional description of the human intellect- coordinates Intelligence, Creativity, Stupidity.


5) Gregory Goble gave me the permission to convey his composition (from composer) "Amazing" about Quasicrystals: Thanks, dear Gregory!

Quasicrystals
http://www.jcrystal.com/steffenweber/qc.htmlQuasicrystals are Nature’s Impossible Matter – Written by DanielOberhaus - May 3, 2015http://motherboard.vice.com/read/quasicrystals-are-natures-impossible-matterGoes hand in hand with An Impossible Inventionhttp://animpossibleinvention.com/LENR enabled by the morphing of Crystalline and Quasi-crystalline stateshttp://www.drboblog.com/lenr-enabled-morphing-crystalline-quasi-crystalline-states/Paper: http://vixra.org/pdf/1502.0248v4.pdfSubcellular neuronal quasicrystals: Implications for consciousnessJohn Gardiner* Commun Integr Biol. 2015 Mar-Apr; 8(2): e983760.Published online 2015 May 6. PMC4594519http://www.ncbi.nlm.nih.gov/pmc/articles/PMC4594519/AbstractNeuron neurotransmitter receptors are in general pentameric. Thisenables them to form pentagonal components in biological quasicrystals(similar to mathematical aperiodic tilings). As quasicrystals havebeen proposed to require quantum effects to exist this might introducesuch effects as a component of neurotransmission and thusconsciousness. Microtubules may play a role in the clustering of thereceptors into quasicrystals, thus modulating their function and mayeven form quasicrystals themselves. Other quaiscrystals in neurons arepotentially formed by water, cholera toxin complexes, and thecytoskeletal components actin and ankyrin.Hofstadter's Butterfly QuasicrystalIn physics, Hofstadter's butterfly is a mathematical object describingthe theorised behaviour of electrons in a magnetic field. It wasdiscovered by Douglas Hofstadter in 1976, who later abandoned physicsresearch and became notable as a cognitive scientist and author. Ittakes its name from its visual resemblance to a butterfly.It is a fractal structure and as such it shows self-similarity,meaning that small fragments of the structure contain a (distorted)copy of the entire structure. It is one of the rare non-random fractalstructures discovered in physics, along with KAM theorem.To test whether Hofstadter's butterfly describes real electronbehaviour requires accurate measurements. Such were not possible whenhe wrote his paper. However, more recent experimental research hasconfirmed the characteristic butterfly shape.Hidden Quasicrystal in Hofstadter ButterflyIndubala I Satija - School of Physics and Astronomy and ComputationalSciences, George Mason University, Fairfax, VA 22030 (Dated: May 2,2014)http://arxiv.org/pdf/1405.0263v1.pdfTopological description of hierarchical sets of spectral gaps ofHofstadter butterfly is found to be encoded in a quasicrystal wheremagnetic flux plays the role of a phase factor that shifts the originof the quasiperiodic order. Revealing an intrinsic frustration atsmallest energy scale, described by ζ = 2 −√3, this irrational numbercharacterizes the universal butterfly and is related to two quantumnumbers that includes the Chern number of quantum Hall states. With aperiodic drive that induces phase transitions in the system, the finestructure of the butterfly is shown to be amplified making states withlarge topological invariants accessible experimentally .

The distinction between the mild LENR reaction and the more powerful LENR+ reaction could well be centered on the production of metalized hydrogen as an amplification mechanism of EMF to concentrate and focus LENR activity in the LENR+ mode.

This may have something to do with the repeated linear strings of graphite like planes that form the backbone of this crystal structure.

The production of metalized hydrogen requires the application of great pressure but there are ways to reduce that pressure requirement using micro particle lattice based and other quantum mechanical amplification methods to reduce and mitigate pressure requirements to the point where Hydrogen Rydberg matter (HRM) can occur in the lab or inside a LENR reactor.

This handful of methods each increases the probability of HRM production. One or two of these methods working alone might not be enough to produce the level of LENR activity that makes the onset of LENR+ activity plainly apparent. But as the entire collection of methods cooperates to increase the pressure of HRM formation, HRM formation is almost a certainty.

There is a goodly number of prominent cold fusion folks including L. Holmlid, M. LeClair, and Ken Shoulders who understand hydrogen Rydberg matter (HRM) in detail that believe the HRM has cosmological significance. That cosmological impact involves HRM as dark matter and producing dark energy. HRM is virtually indestructible once HRM is formed and becomes self-reinforcing.

I first became aware of the great strength and durability of this HRM crystal structure when LeClair explained how the water Crystal could erode the strongest of substances. The pressure in the thin zone of erosion contact between the water crystal and the material exists in the range of a few hundred up to just over a thousand gigapascals depending on the strength of the material. The absolute limit of the pressure achievable at this collision interface has not yet been determined. There is no material that is impervious to erosion from cavitation not even diamond.

In one of LeClair’s experiments, a water crystal ate through 2 meters of copper. The water crystal and HRM have the same hexagonal linear string alignment of graphite like plains. There are many others as of yet undiscovered hexagonal crystal formations that have exhibited the same amazing properties as HRM since many fluids produce cavitation erosion at even greater intensity as water, mercury for example and liquid molten salts.

Cold fusion is just the tip of the HRM iceberg. The as of yet undiscovered science that forms the basis of LENR has huge cosmological ramifications. To introduce just a few, this special hexagonal crystal based material could be producing the nuclear energy that powers the sun. The cold fusion theorist should gain insight into the nature of HRM from its cosmological behavior.

To understand the true cosmological nature, significance, and structure of HRM, See

This article provides valuable insight as to how HRM works:

Liquid Metallic Hydrogen: A Building Block for the Liquid Sun

Finally, M. LeClair shows that transuranic element transmutation can be produced by this graphite like hydrogen crystal structure. The key to this strength is the maintenance of a monopole field that covers the HRM which is a superconductor at any temperature into the millions of degrees range.


Reproducibility: A tragedy of errors
http://www.nature.com/news/reproducibility-a-tragedy-of-errors-1.19264?WT.ec_id=NATURE-20160204&spMailingID=50617576&spUserID=MjA1NTE3MDk1NwS2&spJobID=860373381&spReportId=ODYwMzczMzgxS0
03 February 2016
Mistakes in peer-reviewed papers are easy to find but hard to fix, report David B. Allison and colleagues.

Helping turn waste heat into electricity
How the collective motion of electrons interacting with crystal atoms can be fine-tuned to harvest excess heat
http://www.sciencedaily.com/releases/2016/02/160203110649.htm?utm_source=feedburner&utm_medium=email&utm_campaign=Feed%3A+sciencedaily%2Ftop_news%2Ftop_science+%28ScienceDaily%3A+Top+Science+News%29


Turbocharging Your Organization for 2016
http://www.strategy-business.com/blog/Turbocharging-Your-Organization-for-2016?gko=6cb21
Cipolla's First Rule of Human Stupidity
Posted by Peter Gluck at 8:14 AM