FEB 23, 2016 LENR TO GROW BY COGNITIVE ECDYSIS, TO CHANGE BY METAMORPHOSIS. 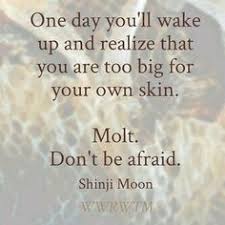 Within the last fifty years, the extraordinary growth of every department of physical  science has spread among us mental food of so nutritious and stimulating a character that a new ecdysis seems imminent (Thomas Huxley)

Third rate encounter with a strange reality- LENR is in deep developmental trouble on many levels- great turbulence. The solutions are patented by Nature: molting , ecdysis for growth, metamorphosis for profound change, Transformation.
LENR has to enter on many ways in a  permanent state of re-invention.
But it is not easy to get rid of your old skin.

The initiative of MFMP- they will publish soon important news (?) has triggered a global brainstorm of creative ideas. Trying to guess what is it about, LENR-ists have generated lots of ideas.
I have a total sympathy for MFMP so I hope the news will not disappoint too much and to many; on the contrary!

The Cookbook is in the signal
http://www.quantumheat.org/index.php/it/home/mfmp-blog/519-c

Bob W. Greenyer: Donors that have accumulated cumulative contributions of $100+ since the start of the project will have partial information shared today. The wider public roll out will be tomorrow. In theory, the news are unstoppable on the Web.

Tommaso Di Pietro
The report is a document restricted to the involved parties, not a public document.
The publication of it will need the authorization of all the parties involved.
Warm Regards
A.R.

Frank Acland:
In progress. The report of the ERV will help a lot, if the results will be positive, because we had a safe operation for 352 days, 24/7. Results after such a long time of tests leave no doubts, because the period is too long to doubt about the results. The safety issues, exploited by top level specialists, will help a lot.
I think the results from the test, if positive, will accelerate the certification for the domestic apparatus, but, of course, this is just my opinion, for the worth it can be granted…
Warm Regards,
A.R.

The letter of V.T. Grinev

Unfortunately I have very serious existential problems. This summer my wife became ill and recently has died (oncology)
All my spared money was spent for medical issues.
I am not working till pension there is still half year. I am ill myself and need money for medication. I must sell the secret of Vachaev. Already in 2013, working in a garage I have built a reactor of Vachaev with my own improvements and a correct construction.
I am almost succeeded to trigger it but it became clear that it already needs  a small and simple
It was planned to start this reactor in 2014. however it has happened what happened.
Moreover, on the Internet I have found some experimental confirmations of its principle of working- as videos. The authors of these videos consider that their experiments are in accordance with my theory. The secret itself is very simple and can be easily described on a single page of text.
Those who well know the scheme of Vachaev's reactor- based on my one page explanation will easily understand why bit could not be launched and why it was not functioning in stable manner by Vachaev himself and that it is necessary to modify its structure for reliability and stability.
More than this, looking on real experiments on the Internet- based on my proposals it is confirmed the truth of my decisions.
This reactor is ideal for the total destruction of the radwastes in industrial quantities at low cost say under 100 rubels per kilogram.
Due to its simpleness it will be possible to build in a few years a plant for the destruction of radwastes.
I will be grateful for the help in finding a buyer.
Vladimir T. Grinev

Cold Nuclear Fusion, LENR and similar- these are for the day before yesterday
A fine collection of videos of A.V. Shestopalov

A smart comment re the 350days test by Nixter:

When Rossi first said that he was more interested in making working energy devices than convincing unreasonable skeptics, I thought he was being rather odd, but over time, and after seeing how those with opposing viewpoints exercise their opinions without concern for truth or reason, I now feel that Doctor Rossi is correct in doing it this way. He can concentrate on placating useless squabblers or chose to focus on useful buyers, only one of these groups will be purchasing his devices in *mass quantities, so why not concentrate on the path that bypasses the nay-Sayers while simultaneously going into full commercial production? Dr. Rossi seems to be ready to deploy the first generation of his LENR+ technology while continuing to improve and invent next generation devices. This tactic should keep him in the game as the LENR hardware leader for at least the next five to ten years. If the first E-Cat works, it makes sense to assume that the 2nd generation X-Cat is real and just as revolutionary as he has claimed, (probably even more so!) A two to five-year lead in this new technology is formidable and won’t be overcome easily. More likely, offshoot inventions like Brilliant Light Power will appear and form separate tracks of development and research. The physicists and scientists will have to discover what is happening inside these devices before they can even begin to write a research grant or ask for investment capital, all while Rossi and Industrial Heat have factories churning out mysterious energy boxes they say are impossible!

To this, Brian Ahern gives a few-words answer:
LENR is real, but Rossi is a talented scammer. He has conflicting statements that cannot align with truthful operation.

Jed Rothwell gives some practical suggestions about the level and extent of the expertise needed by the ERV of the 350 days test:
https://www.wbdg.org/resources/hvac.php
https://www.asme.org/about-asme/standards/performance-test-codes
http://www.bls.gov/ooh/installation-maintenance-and-repair/heating-air-conditioning-and-refrigeration-mechanics-and-installers.htm

A team of University of Texas at Arlington chemists and engineers have proven that concentrated light, heat and high pressures can drive the one-step conversion of carbon dioxide and water directly into useable liquid hydrocarbon fuels.
https://www.sciencedaily.com/releases/2016/02/160222220828.htm


From the blog of my friend Sandor Schuman
Maybe Down is Up:
Connecting business and life for self-knowledge and growth
A Review of Failing My Way to Success, by Steve Lobel
http://sschuman.blogspot.ro/2016/02/maybe-down-is-up.html
Posted by Peter Gluck at 10:04 AM