memecracy
The rule or domination by a meme or memes which are cultural practices or ideas that are transmitted verbally or by repeated actions from one person's conceptions to the minds of other people.

In the original introduction to the word meme in the last chapter of 'The Selfish Gene,' I did actually use the metaphor of a 'virus.' So when anybody talks about something going viral on the Internet, that is exactly what a meme is, and it looks as though the word has been appropriated for a subset of that. (Richard Dawkins) 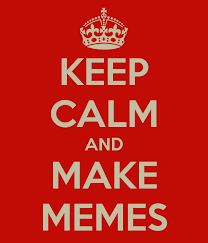 'Meme', the cultural equivalent of "gene" is a concept and word of vital importance  however paradoxically it is not a strong meme itself- it is a bit too intellectual. However you cannot think well if you do not consider the existence of memes. I have written a lot about them including in this Blog.
If you are not familiar with memes please read at least:
https://en.wikipedia.org/wiki/Meme

It is my pleasure to announce you that now again memes have helped me to solve a prob;em I found first very difficult- in retrospective I was slow and non-creative and rigid in thinking.
It is about the enigma of the furious and seemingly senseless character and plant and technology assassination campaign of the IH propagandist lead by Jed Rothwell. (see a new opus by him below).

First it is obvious that IH manifests a totally negative enthusiasm toward the Trial and try very hard to escape from it see papers at 4) Legal battle. No traces of the noble spirit of "Fiat Justitia, pereat mundus"   https://en.wikipedia.org/wiki/Fiat_iustitia,_et_pereat_mundus Justice at any price, but perhaps the cost is too high and the chances to win not so very high.
So what they actually do is clear:

Stay calm but angry, inventive, efficient, and make MEMES- two types:
A- Killer anti-Rossi and anti- what belongs to Rossi memes;
B- Friendly nice pro-IH memes
A-memes are cheap, free, but B-memes have a cost and need more fantasy.. and money. PLEASE read for that the opinions of Doug Marker.

The plan is to disseminate these memes on the Web, make them contagious, the Press, the public opinion and perhaps even the jurors from the Court  will be memefied so the 'obviously good' will increase tremendously its chances to defeat the 'evidently malefic.'
We live in memecracies. Indeed?

Did Rossi and IH have a valid contract that states; that if the general performance test were successful . . ."
I have not read the contract carefully, and I know little about contracts. Here is what I know: the performance was not successful. The data from Rossi proves that the machine did not work.
"IH has not paid and said the Test was not good; where is the first written document with serious warnings from IH to Rossi saying this; was it after the 1st, 2nd or 3rd ERV report?"
This is not a technical question. This has no bearing on calorimetry or science. This question illustrates how you have missed the point. You cannot judge a technical question by looking at people's behavior, or by examining business contracts. This question is fluff.
The dispute between Rossi and I.H. is about calorimetry. It is about flow rates, temperatures, steam quality and instruments. Your questions are irrelevant. Even if you knew the answers, they would not bring you one millimeter closer to knowing whether the machine worked or not.
Instead of waiting to learn the technical details, you obsess over these unrelated, non-scientific questions and gossip that has no bearing on the technical issues. I do not understand how a person with a technical background could make such a mistake.

So dear Jed there are only technical questions, later you say we have to apply the Scientific Method. Please apply it to Rossi's question regarding persuasion of the investors, OK?

1) Ok, So What Did Really Happen When Industrial Heat F*cked Up the Deal with Leonardo/Rossi? And Why?

2) Jones Day Lawyer Drones on Repeat in Another MTD. However, again Showing the Malicious Intent of IH!
http://www.sifferkoll.se/sifferkoll/jones-day-lawyer-drones-on-repeat-in-another-mtd-however-again-showing-the-malicious-intent-of-ih/

An attempt is made to build an LENR theory that does not contradict any basic principle of physics and gives a relatively simple explanation to the plethora of experimental results. A single unconventional assumption is made, namely that nuclei are kept together by a magnetic attraction mechanism, as proposed in the 1980s of the past century by Valerio Dallacasa and Norman Cook. This assumption contradicts a non-proven detail of the standard model, which instead attributes the nuclear force to a residual effect of the strong interaction. The theory is based also on a property of the electron which has been known for long, but has rarely been used: the Zitterbewegung (ZB). This property should allow the magnetic attraction mechanism that binds nucleons together, to manifest also between the electron and any isotope of hydrogen, leading to the formation of three neutral pseudo-particles (the component particles remain separate entities), collectively named here Hydronions (or Hyd). These pseudo-particles can then couple with other nuclei and lead to a fusion reaction “inside” the electron. The Coulomb barrier is not overcome kinetically, but through what could be interpreted as a range extension of the nuclear force itself, realized by the electron when some specific conditions are satisfied. The most important of these necessary conditions is that the electron has to “orbit” the hydrogen nucleus at a frequency of 2.055 × 1016Hz. This frequency corresponds to photons with an energy of about 85 eV or equivalently a wavelength of 14.6 nm in the Extreme Ultra Violet (EUV). So the large quanta of nuclear energy fractionate into EUV photons during the formation of the Hydronions and during the coupling of Hydronions to other nuclei. The formation of Hydronions requires the so called Nuclear Active Environment (NAE), which is what makes LENR so rare and difficult to reproduce. The numbers suggest that the NAE forms when an unshielded atomic core electron orbital that has an “orbital frequency” near to the coupling frequency is stricken by a naked Hydrogen Nucleus (HNu). This theory therefore implies that the NAE is not inside the metal matrix, but in its immediate neighbourhood. The best candidate atoms for a NAE are listed, based on the energy of their ionization energies. The coincidence with the most common LENR materials appears noteworthy. The Electron Mediated Nuclear Reactions (EMNR) theory can explain also very rapid runaway conditions, radio emissions, biological NAE, and the so called “strange radiation”. ⃝
c 2016 ISCMNS. All rights reserved. ISSN 2227-3123 Keywords: EMNR theory, Extreme ultra violet, Hydronion,

This work continues our previous work [1] and in a more developed form [2]), on electron deep orbits of the hydrogen atom. An introduction shows the importance of the deep orbits of hydrogen (H or D) for research in the LENR domain, and gives some general considerations on the EDO (Electron Deep Orbits) and on other works about deep orbits. A first part recalls the known criticism against the EDO and how we face it. At this occasion we highlight the difference of resolution of these problems between the relativistic Schrödinger equation and the Dirac equation, which leads for this latter, to consider a modified Coulomb potential with finite value inside the nucleus. In the second part, we consider the specific work of Maly and Va’vra [3], [4]) on deep orbits as solutions of the Dirac equation, so-called Deep Dirac Levels (DDLs). As a result of some criticism about the matching conditions at the boundary, we verified their computation, but by using a more complete ansatz for the “inside” solution. We can confirm the approximate size of the mean radii of DDL orbits and that decreases when the Dirac angular quantum number k increases. This latter finding is a self-consistent result since (as distinct from the atomic-electron orbitals) the binding energy of the DDL electron increases (in absolute value) with k. We observe that the essential element for obtaining deep orbits solutions is special relativity.

Some thoughts on why Jed Rothwell is so surprisingly persistent with his comments and claims that the entire Rossi 12 month test was a failure (and by default plus his blunt claims that Andrea Rossi and his claims dishonest).Firstly, those of us who made published comments about IH's highly questionable behavior (such as my own comments published here) honed in on these aspects ...1) That IH had paid 2 lots of money to Rossi for eCat tech2) That IH have been in a relationship with Rossi for close on 3 years and not given any prior clear indication before the 12 month test of any issues with that relationship.3) That Rossi's claim that IH used the early phases of the 12 month test to do fundraising. (this was very damning to IH's position).4) Especially, that when this all exploded, the loudest anti Rossi voices were almost all known anti LENR people as well and thus were clearly biased and opportunistically leaping in to exploit the Rossi IH rift but were still using the situation to attack LENR in general.What I am seeing, is that IH have adjusted their tactics in their publicity battle with Andrea Rossi by privately enlisting the support of people we all know are pro LENR (such as Jed Rothwell - and 1 or 2 others). Jed is currently and without doubt, a champion for IH's position. The issue you (Peter) raise regadring this is how is Jed able to be so certain when few others have access to what ever it was/is that he has been given access to.The outcome: Jed is proclaiming (probably with some sense of justification) that we now need to accept 'Jed says' vs 'Rossi says'.IMHO, it is clear that IH have set out to enlist the support of recognized pro LENR identities to counter the quite effective anti IH messages that Andrea Rossi put out around the time he filed his lawsuit.But the questions you (Peter) raise, are valid questions and deserve to be answered. Clearly there will be no answers from Jed who argues he doesn't know other than the material passed to him to enlist his active anti Rossi remarks.So, by enlisting people who are known to be pro LENR people, IH are effectively countering the harsh criticism some of us directed at them and also those people who we know are both anti LENR and anti-Rossi and who leaped on the IH bandwagon as champions of their battle with Rossi. It seems to me IH saw itself in difficulty in the word war until it was able to associate its position with pro-LENR people and break away from only being supported by the opportunity grabbing anti-LENR voices we all know so well.

Addendum:In regard to IH actively enlisting pro-LENR people to publicly join in their defense, If I were in their shoes (they are clearly in a difficult position) I would do what they are doing too.But, it does raise the question as to what kind of inducements or assistance that IH might be offering these people to go public on their behalf and in their defense against Andrea Rossi.I know that all LENR researchers need and seek support so when pro-LENR people clearly become vociferous supporters of the IH position against Andrea Rossi, it justifiably raises the question as to what 'rewards' tangible / intangible, these pro IH voices are being offered.All such questions are valid and deserve answers.Doug Marker


Scientists just made it cheaper to produce hydrogen from water
https://www.sciencedaily.com/releases/2016/06/160627095937.htm?utm_source=feedburner&utm_medium=email&utm_campaign=Feed%3A+sciencedaily%2Ftop_news%2Ftop_science+%28ScienceDaily%3A+Top+Science+News%29 LENR

How Leaders can Ignite Innovation
http://www.greatleadershipbydan.com/2016/06/how-leaders-can-ignite-innovation.html

4 WAYS TO MAKE THE PAST A PLATFORM – NOT AN ANCHOR
https://leadershipfreak.wordpress.com/2016/06/28/4-ways-to-make-the-past-a-platform-not-an-anchor/