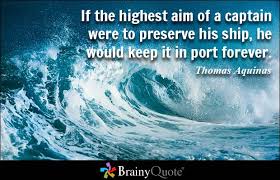 My grandson, Rudy celebrates today his 15th birthday; he is 180 cm tall, athletic, learns well- an alpha personality, however generously tolerant to my accumulating weaknesses and even to my cultural lacunae.
As it is natural he has received  now this book too
Jules Verne: A Captain at 15
https://en.wikipedia.org/wiki/Dick_Sand,_A_Captain_at_Fifteen
and he has read two of my favorite poems, "If" and "invictus" in English on his smartphone to my enchantment.
I know he could be an excellent captain. But only of a real ship where the leader is a leader, boldly takes responsibility and can take the necessary decisions without democratically consulting with the crew or with the passengers.
Nor Rudy, neither anybody could be a happy Captain on the Web there is  actually a noisy shadow of the real leadership.
This refers to research project leaders too- their symbolic ships travel on unknown and very dangerous waters. I know a captain who made an one year exploratory travel of historical importance in the Sea of Energy and who now is attacked by cohorts of myrmidons who had travelled on a ship- never have led a
research work but who know everything bette ). Ugly attacks and his fiercest most vocal critic is a retired Sanskrit to Icelandic (and reverse) translator. (I am~ illiterate in Sanskrit but have read many Icelandic sagas- they are long) The myrmidons have masters who have a litigation with the Sea of Energy captain. It is a rule- the roars of the myrmidons on the Web are strictly inversely proportional to the lack of evidence in the court of the masters. Just now the noise is deafening.

LENR and All That JAZZ Enhanced d-d interaction overlap for fusion and neutron generation https://plus.google.com/107190105791959392745/posts/ekzSkmoVqZL

1) The most successful ways to solve problems  http://www.smartcompany.com.au/people-human-resources/successful-ways-solve-problems/

2) Google’s AI Is Changing the Way a 3,000-Year-Old Game Is Played
https://futurism.com/googles-ai-is-changing-the-way-a-3000-year-old-game-is-played/