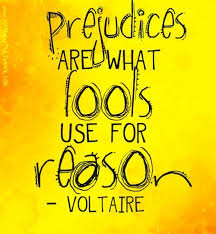 In some circumstances, "prejudice" is just an euphemism for "paid Opinion".

Discussing with Ed Storms about big leaps vs. small steps in innovation.
Re the first point of my dispute with Simon Derricutt, Ed Storms says:

While big leaps are impressive and sometimes happen, this kind of progress ONLY happens after the technology is mastered and is well understood. The required understanding ALWAYS takes place on a small scale.  We have not yet mastered LENR well enough to apply it on a large scale. That is why the effort Rossi is making is so hopeless and self defeating. You surely know this, so why do you keep arguing otherwise?

The truth is complex, I have worked in pilot plants for years and their role is to make your blunders on a small scale and your profits on a great scale. But I think real breakthrough are characterized by quality jumps. So energy density at classic LENR is up to say, 10W/gram while LENR+ ( OK, you do not believe it exists) is >1000W/gram material. Quite a difference.
You say the effort made by Rossi is hopeless; hopeless for whom? In case Rossi demonstrates at the Trial too that the Plant has worked as Rossi says and he indeed starts producing commercial E-Cats, then his efforts were not futile. Are you absolutely certain this will not happen? "How" absolutely?

Rossi has sent people on a hopeless path that is wasting talent and money.  Rather than rational discussion, we are distracted by emotional reactions and ignorant evaluation. Rather than reading the literature and asking questions of people who actually understand the process,  unrestrained speculation is applied. The situation is increasingly like the political situation in the US.  Rational thinking has become a lost art.

Plese let's be fair- Rossi can be a sinner, but he has NOT sent people on any  path, of desperation or not. I also disagree with the idea that he has captured the funds of LENR. LENR was nowhere as funding when Rossi surfaced in in 2011, and he attracted attention to the field, ergo has contributed to increased funding. Good LENR researchers going on their honest and scientific way (long live the Scientific Method!) cannot be influenced by an entrepreneur as Rossi and they know their way to success, understanding LENR first and then developing it step by step to a technology. And if we are looking to some of the best- say you, ENECO, SKINR (in prat) it happened so.
READING THE LITERATURE- these words bring me the sweetest remembrances I am proud of= how we hve discovered Total Documentation - a wonderful story and for the product of my  professional life, by great efforts we have succeed ed to be well documented.- books, papers, patents, grey literature - extending it with reverse engineering of tens of samples of PVC-s. So we had a  solid basis to original research
And, by Jove! it was before the Internet and the Web,
But now in LENR reading the literature, what means it? Take the best and most scientific book- yours. You give wise advises, but how to apply them in practice? Where are the great successes already obtained convincing the m=newcomer to go your way? Take then the newest book- it must be the most advanced in principle, it uis written bt Steven Krivit  reputed journalist.. But he says completely different things.
Take understanding- you have lots of papers, but the best known theorist is Peter Hagelstein  in the USA) he does not agree with you.  Are other LENR authorities, Mc Kubre and Nagel your followers? Who possesses the truth who knows the way?
I ma verty sorry to say it but the literature in LENR you read is broken and auto-contradictory, it is difficult to use it in experimental work.
As you well know, we two hve very different evaluations of the KNOWN/UNKNON ratio in our field. You believe in the internal logic (one) and unicity of LENR, I believe in in its otherness, complexity, diversity, dynamicity, metamorphosis and inexhaustible creativity.
I think that now Science alone is unable to solve the problems of LENR- understanding and development but technology can help, therefore- I know this is unpardonable I think Rossi's shortcut can work. I said "why technology first? in 1995. We have to discuss what can help you reading the literature of LENR, and what remains still to be discovered..

1) A paper aimed for ICCF20, my thanks to Jean-Luc and Andrew

Advance on Electron Deep Orbits of the Hydrogen Atom
https://dl.dropboxusercontent.com/u/14840605/PAILL-MEUL-Full.pptx.pd

Date:September 28, 2016
Source:University of Birmingham
Summary:
Scientists have, for the first time, identified a method of visualizing the quantum behavior of electrons on a surface. The findings present a promising step forward towards being able to manipulate and control the behavior of high energy, or ‘hot’, electrons.
Posted by Peter Gluck at 11:07 AM