'My first 3 Septoes/100 are centered on the idea of interestingness of the World, snd Chaos is there:
1.The Universe feeds our insatiable curiosity forever2. The Universe is obsessed to be interesting.3. The world is simultaneously chaotic and ordered. 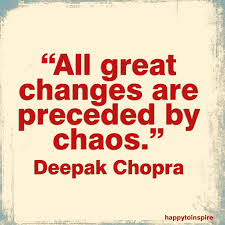 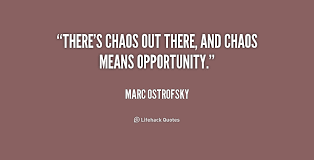 As you probably have remarked my blog strategy is to write daily and offer you LENR information, and, in the same time to examine the problems and perspectives
of LENR from a different - if possible new- point of view.
This morning I have decided to think and write about chaos in our field- and how could we have less of it... then in the late afternoon I came upon this paper revealing a novel facet of the concept:

Chaos could provide the key to enhanced wireless communications
https://www.sciencedaily.com/releases/2016/08/160823125153.htm

It is multi-directional chaos in LENR:
- expressive chaos- conceptual the concept are not well defined and related'
- explanatory chaos- many incompatible, uncorrelable theories, lack of taxonomy;- -  - exegetic chaos- no unitary, systematic interpretation of the data and facts;
- exploratory chaos- experimental strategy is rather aleatory no best ways and best practises established.
But there are already forming islands or order and rationality in the chaos.

For those who dislike "chaos" we can call it "slight disorientation".

ICCF20 will be an opportunity to find and build more order in LENR and to reduce significantly the chaos- a task for the real LENR community. The people who care for LENR.

http://meetings.aps.org/Meeting/GEC16/Session/MW6.27Abstract
Submitted for the GEC16 Meeting of The American Physical Society

Interest has significantly increased in the study of LowEnergy Nuclear Reactions. Especially after the publication of the test results from Andrea Rossi’s high-temperature heat source that operates on a mixture of Nickel powder and Lithium Aluminum Hydride. Initial experiments showed that the reaction is unstable; occurring in a narrow temperature range (in practice, it is outside the melting temperature of the fuel materials). In this work we describe the design of the heat generator, the calorimetric method for measuring the amount of heat energy. The results demonstrate excess heat during heating the powder mixture of Ni and Li[AlH4] to temperatures ranging from 1030—1140 C. The generator did not expose an X-ray photographic emulsion.
1-Professor
2-Associate professor
3-Student

The inventor created his LENR reactor with a working temperature intermediary between those of the E-Cat and the Hot E-Cat of Rossi (750 C) - similar as construction with Rossi's nigh temperature generator, however with the difference that Rossi has increased the temperature while Kuznetsov has increased the pressure of hydrogen.
AXIL DIXIT
Comment on Rossi's Patents

Rossi patent update.patentscope.wipo.int/search/do…621/PDOC/WO2016018851.pdfAs was shown in the Lugano demo, waveform stimulation produces a limited power density reaction that does not exceed at most COP=3 and some say far less. The stimulation that might be used to produce the very high COP is the electrostatic stimulation that generates the TAO effect. That is the reference to the two electrodes that can produce an EMF potential of up to 100,000 volt and is defined in an update to the Rossi patent.If you read this patent update that references the NEW electrostatic stimulator which operates between 50 and 100 KV, Rossi says that the resistance heater is NO LONGER REQUIRED for reactor operations but is still required to heat the reactor to operating temperature at startup.Rossi also says that the reaction temperature is between 400 to 600C. This means that the update is applied to the LOW TEMPERATURE REACTOR.

Abstract.
NaAlH4 was mechano-chemically synthesized with high energy ball-milling method. The effect of synthesis conditions such as milling time, H2 pressure, chloride catalysts, and solvents was investigated to enhance the synthesis of NaAlH4. Among the chloride catalysts, TiCl4 showed the highest H2 pressure decrease which means the highest NaH conversion to NaAlH4. Furthermore, when the NaAlH4 was synthesized with THF solvent, it exhibited the higher H2 pressure decrease than that of sample prepared without THF solvent. This is mainly due to the synergy effect of TiCl4 catalyst and THF solvent.

Bruno the brave
For anyone who dares to voice dangerous ideas and risk imprisonment or exile, Giordano Bruno remains a hero
https://aeon.co/essays/why-giordano-bruno-is-still-a-free-speech-hero-today?utm_source=Aeon+Newsletter&utm_campaign=d338e52aed-Daily_Newsletter_25_August_20168_25_2016&utm_medium=email&utm_term=0_411a82e59d-d338e52aed-69012005
Thinking about the martyrs of Cold Fusion, LENR. remains a hero
Posted by Peter Gluck at 11:18 AM