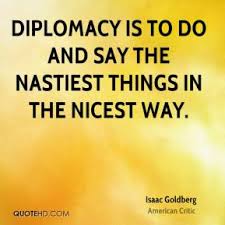 a) Sese syndrome hits me again!
Yesterday, writing about LENR and Accountability, I completely forgot this important fact, thanks to David Nagel for reminding me this! My consolation, he is younger than me.

Regarding accountability, Scott Chubb arranged with the editor of the journal "Accountability in Research" to publish a special edition on cold fusion. It appeared in Volume 8, Numbers 1 and 2, in 2000 (162 Pages). The issues contained nine articles. Among the authors were Martin Fleischmann, John O'M. Bockris. S. E. Jones and George Miley.

I predict that in the coming years of LENR history, combining the peaceful Reconquista of its lost positions in the world of Science and Technology with the start of conquering commercial markets - with a formidable multi-lateral, diversified
activity of research. We will need many kind of professionals and their list includes good, effective,  diplomats able to develop a habit of invincibility in discussions and negotiations.
The case of LENR- is special - diplomatically thinking and speaking.
Diplomats fight, work, act for causes- LENR is a strange cause, long time believed to be la Lost cause, but now with high hopes to be a great winner of the Energy Revolution in course. The mission and reason to be of the LENR diplomats is complex and difficult- but his/her core activity is building strong arguments, much stronger than those of the opponents.  Arguments based on facts, arranging them
in consistent dynamic and adaptive logical systems and wise taxonomies creating an arsenal of effective weapons, The skill of using arguments is vital for our LENR diplomats too, especially in Armageddon like days when lots of uncertainty icebergs have to melt away. As Marilyn vos Savant says it: "Be able to defend your arguments in a rational way. Otherwise, all you have is an opinion"
The LENR diplomat must develop an analytic and synthetic, holistic and simultaneously holographic vision of LENR. He must build a realistic vision of LENR's history- with a enhanced focus on the future- I am forced to think that this will be the most difficult task from the entire long range campaign of LENRization of the world of energy. Rethinking history is psychologically speaking, an almost impossible task.
Other skills, virtues and qualities of our LENR diplomat:
- the ability to find the best sources of information;
- knowing how to build positive, friendly relationships with partners but also with adversaries, good in creative teamwork,
- being able to translate and interpret with full empathy and smartly  from other languages, modes of thinking, cultures mentalities in his own ones;
- using Rikki-Tikki-Tavi's method well- being faster and a better surprise generator than his opponents;

- developing a personal style and "class" - when winning but also losing with elegance and dignity;
- independent in action and thinking- being realist- recognizes the existence of Evil
and malignity in some people;
- loving words, mastering rhetorics and the art of persuasion and trying to attain maximum ideas/words ratio- sometimes, when necessary-the reverse too;
- expert in removing obstacles- good problem solver, developing superior communication skills;
- good listener, good memory, perfect ability to forget or to ignore things not useful for the cause

Please read also this- it is about a political diplomat, the one specialized in LENR is more a scientific-technological issues diplomat. Ideal qualities of a successful diplomat http://belfercenter.ksg.harvard.edu/publication/23506/ideal_qualities_of_a_successful_diplomat.html

The author of the following quote was a Romanian world-class diplomat:


The destiny is the excuse of the weak and work of strong ones. (Nicolae Titulescu)

This is about LENR too- it was born crippled and weak but now it is changing its destiny- becoming a strong, powerful source of energy.

This essay has made me to think about the future- I am jobless and I will try to get a position of LENR diplomat. As first, introductory missions I see: negotiating funds with Bill Gates and his billionaire friends, weekly LENR news column in the WSJ and arranging the opening of Nature and Science for LENR publications. Just to be prepared for really difficult tasks.

Please think about the possibility to help the LENR World to celebrate the 27th anniversary of the field (March 23) with a decisive victory. You could do this by publication of the Executive Summary of the ERV Report or even better the balance energy bought vs energy sold made by the accountant of the Customer during the 350 days of the experiment as I have asked on my blog yesterday.
Wishing you a long triumphal technology march,
Peter

Andrea Rossi
March 14, 2016 at 12:44 PM
Peter Gluck:
Thank you for your kind suggestion, I will see what I can do with the agreement of all the involved parties.
Warm Regards,

The issue is discussed here:

3) Will Future be dominated by Nuclearphobia  or Advanced Nuclear Energy Sources like LENR?
http://bravenewsworld.com/2015/03/controversy-lenr-new-energy-source/

4) This presentation will come in 63 days:
"The clean energy revolution: science and policy" with Prof Daniel Kammen
https://www.youtube.com/watch?v=pcBYyGG9n3A
Scheduled for May 17, 2016
This is a joint lecture with INET Oxford

In this talk Professor Daniel Kammen, Oxford Martin Visiting Fellow at INET Oxford, will discuss the strategies emerging to cost-effectively decarbonise energy systems worldwide. This work integrates elements of the science and engineering of energy systems, regional and global energy and environmental policy, and mandates and mission objectives that have emerged from the Breakthrough Energy Coalition, and energy and climate planning in both developed and developing nations.

As Science Envoy for the US Secretary of State, Kammen will also examine opportunities that have arisen as result of the Paris Climate Accord, and US and Chinese climate agreement.
Oxford Martin School,
University of Oxford
www.oxfordmartin.ox.ac.uk

5) On the LENR-Forum:
another partner company of Industrial Heat seems to be George Miley's Lenuco LLC. A few patents were recently transfered to the IH Holding company
https://www.lenr-forum.com/forum/index.php/Thread/2886-Miley-s-patents-and-a-heating-coil-patent-assigned-to-Industrial-Heat-Holding/

Perimeter Institute director Neil Turok discusses his point of view on whether we’re at “the end of physics”I think what people are sort of expressing is that we haven’t had a big revolution in physics. String theory was hoped for to be that revolution in the 1980s but it hasn’t really panned out in the sense that it hasn’t given a single prediction. Instead it’s given us a huge collection of theories where, if you like, there’s no overarching theory to tell which particular version of string theory is the one that describes the world. It’s almost self-destructed, I would say because it turned out to be not just one theory but this vast collection of theories which could all give different descriptions of the world.So I think that sort of theoretical catastrophe, as I view it — meaning the logical pursuit of quantum mechanics and relativity over a hundred years was tremendously successful at some level but finding its own successor theory, it hasn’t been successful. I think that is also laying the ground for some sort of revolutionary change in the sense that we basically will have to go back to the founding principles. It looks like the founding principles of modern physics — quantum theory and relativity — have played out and they have not given us the answers we need. And so we have to go back and question those founding principles and find whatever it is, whatever new principle will replace them. So matching these great puzzles posed by the observations are equally great puzzles in our fundamental theories. And so that is just a wonderful thing to contemplate in itself. I mean, partly people become very pessimistic and say, oh my god, I’ve devoted 50 years of my life to studying this incredibly technical and difficult theory and now I find it’s blown up in my face, it’s not giving any predictions at all…and so some people talk about the multiverse where the universe would be wild and chaotic on large scales and almost anything you could imagine would actually exist somewhere in the universe. I mean, this is literally a scenario which became very popular among a category of physicists, that there is a multiverse out there. Yet the evidence is exactly the opposite. That, as we look around us, things could not be simpler. There’s no evidence for chaos on large scales in the universe. It’s totally the opposite. It’s pristine, elegance, minimalism is all we see. So, I think this is a very, very exciting time to be doing theory. The challenge is enormous. The clues are enormous. We’re waiting and we’re preparing and we’re encouraging people to take radical leaps.

"My patience finally broke - I just posted this in ecat news ..to Al Potenza or Mary Yugo etc

No Al, I believe you are a deranged obsessive (just look at your 1000s and 1000s of obsessive posts) who after 5+ years of constant blather aimed at LENR, Rossi (a soft target), IH anyone who disagrees with your POV or your obsessed view of the world.
At times you act like you have a ‘messiah complex’ (Al (you) as AP, MY, GH, (whatever else avatar you concoct and hide under) are here to save the world from scammers like Andrea Rossi and you add into that LENR supporters – Hallelujah!!!).
Anything said about Rossi and *anyone* near him or anyone suggesting maybe LENR needs looking into, becomes fair game for your obsessive attacks which extends to calling them all every nasty vicious name or label you can concoct.
Now you are attacking Investment funds and other sincere businessmen as being part of the obsessive evil your messianic rants are aimed at. You act just like a self-centered egotistical, maniacle messianic self appointed God !.
But believe me, not many people think you are in any way majestic or regal or anything but a screwed up obsessive ‘fwit intent on wreaking your warped mission on the world, at any cost."


From Mary Jo Asmus- inspired by a song I also like:
Inspiring others with what can be
http://www.aspire-cs.com/inspiring-others-can/
Posted by Peter Gluck at 10:18 AM