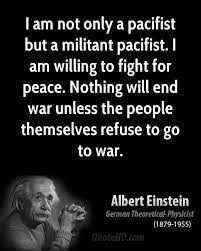 Uncle Albert, can you explain this to the fighters in the RvD conflict? And to many others? I will send you a list by e-mail this evening.

I simply wanted a peaceful day; on my word of honor NOT my arterial tension has lead me to the decision to organize a peaceful day today. NO LENR quarrel and reading with calm opinions that openly contradict my LENR ideology.
I do not think this will last (I know rather well myself),  I  do not hope pacifism is contagious in any way and history will surely NOT be marked by pacifism on
January 20, 2017.

I take the risk of an seemingly impolite  question but I justify it asserting that
with PdD electrolytic- the Problem is the problem per se, it is difficult and it if my  in
more senses simply unsolvable if we remain in the cradle setup. (F&P Cell)
How much have you progressed - as results and as understanding from your first Test to the most recent one?

The Answer
Peter, understanding of how to cause LENR  is gradually increasing.  Much of the understanding is not accepted by many people in the field simply because they do not understand or accept the models that actually apply.  This is a materials science problem, not a physics problem.  Until that fact is acknowledged and applied, very little progress will be made.  Meanwhile, people who apply this fact are making progress.  This progress is not shared because IP issue are involved and because I find that very little gain results from trying to educate the skeptics or the ignorant.

I do not expect any deep level of understanding will be accepted until the subject is taught in university.  Most people are too ignorant of the required information and have too little basic understanding of science to understand much of what is said about the subject.  Everyone seems to have their own ideas about what is real, which makes teaching difficut. At least in university, the student has to listen to the source of knowledge (professor). On the internet, facts and understanding can be ignored because everyone thinks their idea is correct.  In university, such people have to change their minds or they fail.

Yes, I agree, initially every idea has to be considered and open discussion is needed to sort the wheat from the chaff.  We have passed that time in the LENR field. Much more information is available than most people consider or accept.  People keep trying to reinvent the wheel while fighting every description of how the wheel works - or even that it works at all.

Thsnk you, dear Ed!
Dear Readers, please think about both, Q and A!

Good luck in NC – just remember .. IH wants the ECat technology really badly – it even issued new patents around it during the tests * which is probably what did upset DR Rossi the most.

Make no mistake here: these technologies work and all the people involved know very well about it.”

b) Peculiarities of hydrogen absorption by melt span amorphous alloys Nd90Fe10
http://www.lookingforheat.com/wp-content/uploads/2016/12/Vladimir-Nd-FE.pdf
V.I. Dubinko, O.M. Bovda, O.E. Dmitrenko, V.M. Borysenko, I.V. Kolodiy National Science Center "Kharkov Institute of Physics and Technology” Kharkov 61108, Ukraine
A fierce exothermic reaction was detected in Nd90Fe10 films with sufficient degree of amorphous phase upon filling them with hydrogen or deuterium, which resulted in the melting of the samples and the Cu foil, in which the samples have been wrapped. Quantitative analysis have shown that the amount of heat produced in large Nd90Fe10 samples in our experiments is 80÷100 kJ per g of hydrogen, which cannot be explained by DSC data on the heat produced in small samples under different heating-cooling balance. Possible reasons for the discrepancy are discussed including low energy nuclear reactions taking place at the initial stage of hydride formation.


Large signals of charged light mesons are observed in the laser-induced particle flux from ultra-dense hydrogen H(0) layers. The mesons are formed in such layers on metal surfaces using < 200 mJ laser pulse-energy. The time variation of the signal to metal foil collectors and the magnetic deflection to a movable pin collector are now studied. Relativistic charged particles with velocity up to 500 MeV u-1 thus 0.75 c are observed. Characteristic decay time constants for meson decay are observed, for charged and neutral kaons and also for charged pions. Magnetic deflections agree with charged pions and kaons. Theoretical predictions of the decay chains from kaons to muons in the particle beam agree with the results. Muons are detected separately by standard scintillation detectors in laser-induced processes in ultra-dense hydrogen H(0) as published previously. The muons formed do not decay appreciably within the flight distances used here. Most of the laser-ejected particle flux with MeV energy is not deflected by the magnetic fields and is thus neutral, either being neutral kaons or the ultra-dense HN(0) precursor clusters. Photons give only a minor part of the detected signals. PACS: 67.63.Gh, 14.40.-n, 79.20.Ds, 52.57.-z.
11) Dieter Britz authorizes coldfusioncommunity.net to host his cold fusion resource
http://coldfusioncommunity.net/dieter-britz-authorizes-coldfusioncommunity-net-to-host-his-cold-fusion-resource/

THE OPINION OF ALAIN COETMEUR

About Wright Bro achievemenet, like about Edison, what surpised me was that I realized recently they had strong method, strong rigor.
It is not only trial and test, there is also a vision, a deep understanding of the problem, BUT this vision, this understanding is Bottom-Up, not theoretical, but engineering focused.
Of course quickly they understand they need theory, measurement, tables, and Wright Bros invented the wind tunnel, and produced wing shape performance table, propeller theory.

Their success is produced by putting science and theoyr at the service of engineering challenges, not the opposite.
now I connect that to another I dea I had recently reading the news on Lidgren and Lundin patent, and ponderomotive force theory...
I cannot understand if this is a great theory, but let us assume it is, but that it is not complete, not exactly explaining LENR as they say.
My naive proposal is to mix their theory to enhance another.
My favorite is the Slow Fusion of Edmund Storms.
i use the term Slow Fusion because for me, the hydroton is an anecdotal proposal of mechanism, while "Slow fusion" is for me the unescapable conclusion od Edmund Storms from his conservative assumptions and his percerption of the experimental resulst (that i share).
Maybe I'm wrong, but I feel that Slow Fusion theory, even with Hydroton hypothesis, is an incomplete theory.
The core quantum mechanic mechanism is not precisely defined... I see ideas, but it is not mathematically defined.
When i read Takahashi TSC theory, Kim-Zubarev, Swartz-hagelstein, I see much better mathematical definition, but the disagreement are more with the observations, as Storms complain.
My desire would be to merge Ponderomotive force ideas with other theory.
With incomplete theories like Slow Fusion, it looks possible to put the mathematical description of Ponderomotive Forse as an inner mechanism to implement Slow Fusion, with Hydroton (or alike) giving the metalurgical context in which LENR happens.
With complete theories like TSC, it is not easy for me to imagine how to merge it with Ponderomotive Force idea.
Edmund Storm's theory for me is like the Wright brothers theory of Wings, of propellers. He proposed it from a range of experiment, exploiting his knowledge in macroscopic science,and few from QM.
there is room for a QM physicists to propose a "QM module"...
the problem is that today this incomplete, bottom-up, macroscopic, phenomenological approach is not fashion, and people want upfront and totalitarian theory from the QM to the macroscopic.
You talk often on the LENR+ approach versus the old F&P approach.

To be clear, the engineering approach cannot avoid the theoretical, and even the QM theory challenges, but it is only a question of method, of governance, of priority, or direction upward vs downward...
Question is who is the boss, and what is the problem.

Wright and Edison shows that it works best if the dreamer is the problem provider, engineer is the problem definer and solver, and science is there to serve problem solving effort with theory, experiments and math.

Technology: He wrote the future. On Arthur C. Clarke's centenary
by Andrew Robinson
http://www.nature.com/nature/journal/v541/n7637/full/541286a.html?WT.ec_id=NATURE-20170119&spMailingID=53225513&spUserID=MjA1NTE3MDk1NwS2&spJobID=1083504884&spReportId=MTA4MzUwNDg4NAS2
The author is very "LENR", the paper not so.
Mesmerizing scientific paper confirms iron as the most precious and rare life sustaining factor for ocean plant life. By Russ George
https://www.linkedin.com/pulse/mesmerizing-scientific-paper-confirms-iron-most-precious-russ-george

Probletence-destroyers of the World: Unite!
JONATHAN TEPPERMAN EXPLAINS HOW TO FIX THE WORLD'S THORNIEST PROBLEMSFrom income inequality to gridlock, progress is coming from some unlikely sources.http://www.strategy-business.com/podcast/Jonathan-Tepperman-Explains-How-to-Fix-the-Worlds-Thorniest-Problems?gko=0c26e&utm_source=itw&utm_medium=20170119&utm_campaign=plaintext