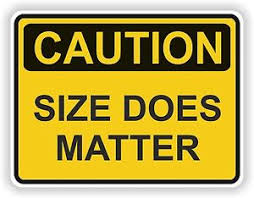 Size matters but we have to know- which size, the size of what?
Size matters, form matters sometimes almost as much as size. I was reminded about this today - see the paper about catalytic converting of CO2 from air in ethanol (at LENR IN CONTEXT-1) It is a very impressive achievement of nanotechnology- and please do not forget that LENR if and when it works is alos due to progress in nanotechnlogy- nanostructure, nanoplasmonics, nanodynamics.
A different example for "size matters" - those who cannot see the difference between a zero excess 1MW plant , 20kW in and out from the normal performance, 20 kW in 928 kW out, as described in IH Exhibit 5  based on the leaked ERV Report average values for long 10 months- it is as if you cannot distinguish a round worm from an anaconda

1) NEW THREAD: The Rossi Effect: How much hydrogen is enough?
https://www.lenr-forum.com/forum/index.php/Thread/4441-The-Rossi-Effect-How-much-hydrogen-is-enough/?postID=39481#post39481

2) The Truth About Why the Tesla, Apple and Samsung batteries are really blowing up: LENR’s and atom-level degradation

There is a dream that LENR supporters have that may not come about. This dream is the "off the grid" independence that is rooted in rugged individualism and the frontier spirit.There are two characteristics of the Rossi fuel cycle that will force Rossi type LENR toward government control, regulation and use in large scale utility based power plants.The first is the production of hard to shield intense muon fluxes that disrupt electrical equipment out over a long distance away from the home based reactor. For example, the Defkalion reactor produced electrical interference so intense, that two Faraday shields plus mu metal was unable to keep the phone system that serviced their lab operating.This is a common observation for LENR developers as follows:ME356 states: "Emissions (RF, electrons and UV) during the test were so strong that my control circuit was absolutely crazy even that it was 3 meters away - it is unusable.I am very sure that this behavior is real as it happened to me too. I use analog pressure meter which cannot be damaged.I am sure that the noise is extremely high as it affects computers and USB peripherals 2 meters away.Everything is contactless.Also I have checked that SiC element is producing so intense EM field, that my IR meter (that is reading data from TC) was unstable at 800W and more."The second issue is the production of nearly pure Lithium 6 as a ash product. This will place every Rossi reactor under the licensed control of the NRC and the IAEA. The people who control proliferation and the regulation of bomb capable materials will not allow Lithium 6 generation out into general public use.

Pushing the boundaries of magnet design
New method to make permanent magnets more stable over time
https://www.sciencedaily.com/releases/2016/10/161018142819.htm
Date:October 18, 2016
Source:Springer
Summary:
For physicists, loss of magnetization in permanent magnets can be a real concern. In response, scientists created the strongest available magnet -- one offering ten times more magnetic energy than previous versions -- in 1983. These magnets are a combination of materials including rare-earth metal and so-called transition metals, and are accordingly referred to as RE-TM-B magnets.